While Kik Messenger is a remarkably simple chat platform to sign up for and use, certain features can prove to be difficult to break into. Kik chat groups–especially popular through 2015 and 2016–can fit into this set of features as they lack a uniform list or register by which to search them.

The whole point of a chat platform is to connect individuals’ voices to each other, be they strangers or friends. Kik is exceptionally good at this, and the app’s chat groups only make it better. However, for the reason listed above, many users can sometimes find it difficult to find their way into an active chat group without specific invitation. How are you supposed to search for them when you don’t know what any of the groups are called? If you can’t search for Kik groups, how are you supposed to join them? Why isn’t there an accessible list?

These are all perfectly valid questions and concerns and the answer to most of them comes down to issues of privacy and safety. For the same reason that your username is the only ticket that other users need in order to be able to message you, knowing the name of a chat group will lead most users straight to the group’s doorstep. Since users can create chat rooms for whatever they like, amidst any group of contacts that they want, it’s easy to see why not every chat group wants to be sourced and found on an all-encompassing list.

However, this has left it up to users to find ways to list and find chat groups that are open to you joining in. In the newer versions of the Kik Messenger app (but not older releases), being added to a chat group will actually depend upon you either scanning the Kik Code that gives you entry or being invited by one of the group’s members. This has both bolstered the privacy offered by Kik’s group chats as well as made the process of joining reliant upon other users.

Thankfully, Kik users took the bull by its horns and shaped entire hubs by which to organize and find each other. It will still require a little bit of extra leg work to get them; these lists and collections can’t be found from within the Kik application, after all. In spite of that extra work, though, the benefits possible in finding a group of like-minded people to share your Kik experience with can be invaluable. Better yet, a lot of these collections are kept up to date by their myriad inhabitants. If you’re looking for some of the more popular groups that were active from 2015-2016, you certainly stand a chance to find them.

In this guide, we’ll outline a few places where you can find groups, and how you can go about joining them. We’ll pay specific attention to the relevance and timeline of these groups to ensure that they were recently active. After all, it’s somewhat useless to stumble upon a group that nobody’s posted in for several months, right? Lastly, we’ll gloss over some tips and tricks to make joining these groups a smooth (and safe) experience.

Never doubt that a small group of thoughtful, committed citizens can change the world; indeed, it’s the only thing that ever has.- Margaret Mead

When you were first downloading the Kik Messenger application from your mobile device’s app store, there’s a good chance that you saw other apps that were masquerading as being affiliated with Kik. Many of these purport to be useful for connecting you to other Kik users. Some of them even are capable of connecting you with other users, but a somewhat universal truth amongst these third-party apps is that they’re riddled with scammers.

Therefore, your best means of finding the best, active Kik groups are to search elsewhere and avoid the app store. Instead, your best results are going to be found by perusing other places where people gather online, several of which will be listed below.

Searching for a list of ranked activity in relation to Kik chat groups isn’t going to yield anything specific or useful. However, a few minutes spent on Tumblr can point you towards both individuals and chat groups while also telling you if they’re still active and relevant.

You’ll begin your search at the top of the Tumblr home page. You won’t need to sign up for an individual Tumblr account, though you can if you’d like; since you’ll only be searching Tumblr rather than posting in it, it’s not necessary. In the search entry at the top of the page, type in anything you’d like to search for related to Kik. For example, simply typing in “Kik Groups” will yield dozens of groups that all feature a maintained Tumblr blog. Many of these are organized by topics and interests, which is convenient for you! Browse through any of these, and a glance at the date of the most recent post will also tell you if the correlating Kik Messenger group is still active.

While Tumblr is certainly a reliable place to begin your online search, Reddit remains my personal favorite. It’s still a hub of online activity for users of all ages and interests, as well as a landing place for many Kik users who are looking for active chat groups. Additionally, it’s easy to search and will yield up-to-date results brought to Reddit by other Kik users.

Much like Tumblr, Reddit is simple to search without creating a profile, but if you want to partake in any discussion happening there (or share your username with other people) you’ll have to sign up for an account. The good news is that it’s free! Though it’s one extra hoop you’ll have to jump through, it isn’t necessarily a step that you have to take in order to find Kik groups in this corner of the web.

A simple search will reveal individual threads and “Subreddits” dedicated to particular Kik chat groups. You might have to dig a little bit to find exactly the group you’re looking for, but you’re very likely to have early luck. When I searched simply for “Kik,” for example, I was immediately presented with the Kik Pals subreddit. 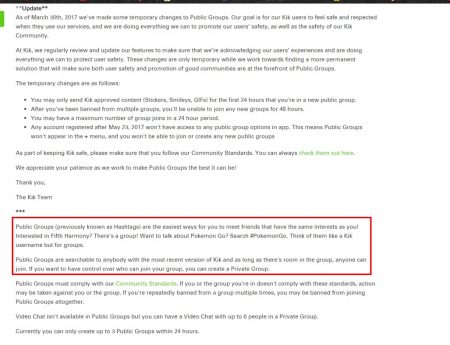 Though the above options are certain to give you a greater variety of open groups to join (and won’t require you to create a separate profile) this doesn’t make them the only places to search. With the vast portion of the population that uses applications such as Facebook, Twitter, Instagram, and Snapchat, you can bet that a great many Kik users are also using them too. Because of this, those same Kik users are using these social media programs in order to connect with each other and lay a foundation for their chat groups.

Whereas Tumblr and Reddit specialize in connecting people who don’t necessarily know each other–both are exceptionally open communities–applications like Facebook are frequently used by communities of people who are already acquainted. This isn’t a rule so much as a trend, but either way, it means that many of the Kik groups you find in Facebook and similar applications will be closed, open to new users only by invitation. This isn’t necessarily a reason to not pursue them; instead, it only means that you’ll need to request membership in the group before you’ll be invited to join (or, inversely, given a Kik code to scan.)

The methods you’ll use to search these sites will vary, but a few simple rules in your searching will help you to yield better results:

Though the newest iterations of Kik Messenger make chat groups a little more private and a little harder to find, they also allow those chat groups to remain focused on the interests they were built upon.

If none of the above appeals to you, then you can certainly turn to your old friend the search engine to dig up leads to active Kik chat groups. However, my own experience has yielded far more (and better) results with the above options, as well as saved me from digging through pages of search results and leads that only point to nonexistent or expired chat groups. Have you staged your own hunt for a list of 2015-2016 Kik chat groups? We’d love to hear about your results in the comments, below! Also, please share this on Facebook and Twitter so that your friends can find these cool Kik groups.