Whether you are new to Kik Messenger or have already been using it for a while, you would probably wonder about the Kik logo and history.

Although the application’s official name is Kik Messenger, most people who use it just refer to it as Kik. It is common now also for some people to use “kik” as a verb. They would say on Twitter things like “kik me”, for instance. This is one of the ultimate signs that an Internet product has made it and become truly popular. Just think of how people use “google” as a verb, too. I’ll google it or just google it if you don’t know, they say! It only make sense because everybody knows that Google is a search engine so they know that “googling something” means search for it online. Likewise, when a Kik Messenger user say “kik me”, it is understood that what he or she means is “message me on Kik Messenger”.

It is, of course, not necessary at all to know the history of the Kik Messenger app (application) in order to use it and enjoy its many benefits, but we will assume that since you are reading an article entitled “Kik Logo & History”, you will be a least slightly curious about it. We will walk you through the short but intense history of the Kik Messenger app and its logo in this article.

A Little Bit on the History of Kik Messenger

There are other similar services out there, many of which date from more or less the same time period. These instant chat or messaging apps include the following:

The Kik Messenger app came about at the time when smart phones started to become popular and widespread in many countries around the world. It was thought at the time that smart phones had a clear advantage over computers (even laptops). Developers rightly thought that smart phone users would embrace apps that would allow them to communicate with each other at any time.

The application is own by a Canadian company known as Kik Interactive. At the time when Kik was launched, back in 2009, Kik Interactive was just a bunch of students from the University of Waterloo Velocity Residence in Ontario, Canada.

The popularity if the Kik Messenger app was almost immediate. Within a couple of weeks of its original release (just 15 days after launch), there were already more than one million registered users.

Why did the Kik Messenger app become so quickly? Many believe it was because some Twitter users signed up and starting sharing their Kik messenger usernames with their followers on the hugely popular social media site. Whatever the reason for its phenomenal initial success, the Kik Messenger app has remained popular in its five years’ existence.

Kik Messenger is not only popular with its millions of users but has also attracted the attention of important international investors. For example, back in 2014, Kik received enough capital from investors, SV Angel, Millenium Technology Value Partners, and Valiant Capital Partners that it could by the GIF Messenger known as Relay. It is estimated that the capital Kik Messenger was able to raise was $70.5 million (US). Not bad at all for a then 3 year company founded by Canadian college students!

Not everything has been that good in the history of the Kik Messenger app, although it is true that the positive far outweighs the negative things that may have happened in the company’s brief history of meteoric rise.

There have been some controversies mostly revolving around minors using the Kik Messenger app, but as we have explained in other articles about the instant chat app, Kik Messenger goes to great lengths to ensure that its users’ privacy and security are protected and make this one of the very top priorities. It must be said that these kinds of controversies are not unique, as they have also affected other similar online products and services.

There have even been lawsuits in the history of the Kik Messenger. The most notable of them is probably the one the company had to face approximately a year after its launch in 2010.

At the time Kik Messenger was removed from the BlackBerry app store (App World) over an issue of misuse of trademarks and patent infringement but the lawsuit was settled between Kik Interactive and the company that sued them in 2013.

The Kik Messenger app now has 300 million registered users in more than 230 countries around the world. This means that, as a user, you will be able to message with all kinds of different people located worldwide. Kik Messenger is a truly international phenomenon.

If you want more numbers, Kik Messenger claims that there are 2.5 million Kik optimized mobile websites that are shared by Kik registered users every day. That is indeed an impressive number and one that is not easily rivaled by other similar instant messaging applications. 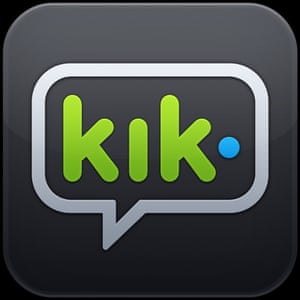 At its core, the Kik Messenger logo has barely changed, in fact. The same font spells out “kik” in small case rounded letters in an attractive and lively lime green color; and a blue dot to the right of the lettering. The Kik Messenger logo’s appeal rests mostly it is simplicity and the friendliness suggested by its roundness and appealing colors.

The logo originally had a black or a dark gray slightly metallic background. A far more welcoming white background has now replaced this. This seemingly small change has made the Kik logo more in line with the logos of other apps.