When most people think of the Kik Messenger app, they probably think of a great app (application) for sending and receiving text messages. And, although they are not entirely wrong about that, there is so much more than can be done on Kik Messenger. Today, we will just talk about just one of the many other features available for free to everyone who uses the instant messaging app. We are talking about sending and receiving photos.

In this article we will try to cover anything you will ever need to know about sending photos on the Kik Messenger app. Very often, photos that are shared on Kik Messenger are referred to as Kik pictures so we may refer to them as such on occasion throughout this article.

What Kind of Photos Can Be Kik Pics?

As we said in the introduction, Kik pics is merely a term that it is very often used to refer to pictures that are sent and received on Kik Messenger. This applies to any picture that is ever shared on the instant messaging app. If you are wondering how often pictures are shared on the Kik Messenger app, these numbers are hard to crack but we know that with more than 200 million registered users, we are most probably talking about millions of pictures or photos being shared every single day.

Clearly sending and receiving pictures on instant messaging apps is a hugely popular activity. This explains why we even have apps that put the stress on sharing pictures instead of on sharing text messages. Snapchat is the best known of this kind of apps, without a doubt. But, if you were looking for an app that would allow you to both exchange text messages and also share pictures, the Kik Messenger app would be one of the best options for you.

So, what kind of pictures are we talking about? With Kik Messenger you can share virtually any picture that you could take yourself or find on line. You can either take a picture (or a video) using the in-built camera and share it with anybody you are chatting to (both on a one to one basis or as part of a group chat), or use the in built web browser. The in built web browser would allow you to search for pictures on the Internet without having to leave the chatting app or interrupt your conversations and the share the pictures you find easily from the app itself. This is one of the things that make the Kik Messenger app so great.

Most other instant messaging apps also have in built cameras that let their users take pictures and share them there and then with others. What makes the Kik Messenger app so different from the other apps of its kind is that you can also browse the Internet within the app. The benefits of this feature are two-fold: on the one hand, you would be able to keep chatting while you browser the Internet; and on the other hand, if you find anything online (a picture, a video, an article, or anything else), you would be able to share it with your Kik friends there and then.

How Do You Send Photos on Kik?

“Of all our inventions for mass communication, pictures still speak the most universally understood language.”- Walt Disney

All Kik Messenger users can send and receive photos on the Kik Messenger app. There are, however, differences in the process that users would need to follow in order to send pictures depending on the smart phone or smart mobile device they use. 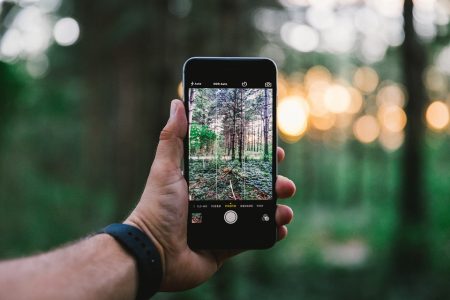 Although rare, it is quite possible to encounter certain problems when following this process. If you find that you can access your photo gallery (or galleries) from the Kik Messenger app, do not worry for it simply means that you will have to give the instant messaging app permission to access the pictures in your smart phone or mobile device. If that is the case, just go to your smart phone settings and go into your application manager to allow the Kik Messenger app to access your photos.

You will be able to send and receive pictures on Kik Messenger even if your phone or mobile device does not have a camera. In that case, the only difference is that taking a new photo with the app will not be an option for you. But, you will still be able to send photos you have stored on your device.

So, this is all you need to know if you have an Android or an iPhone device. If, however, you have a Windows Phone, the process is slightly difference. In that case, just follow these steps:

If you do not have an iPhone, and Android device, or a Windows Phone you might find it difficult to send photos using the Kik Messenger app. For example, at the time of writing this article, it is not possible at all to send Kik pictures on any BlackBerry devices. Even devices that are not able to send pictures using Kik Messengers would allow you to receive them and view them.

If you want to take a picture and send it there and then you would be able to by following the steps that we went through earlier with just one small change. Instead of choosing “gallery”, you would have to choose the “camera” option. This will launch your device’s camera, allowing you to take a picture. Once you have taken the picture that you would like to share, simply tap on the “send” icon. If you do not like the first picture you can delete it and retake it as many times as you would need to until you are satisfied enough to send it. However, many users prefer to take the picture outside the Kik Messenger app so that they are able to edit it exactly how they want it before sending it on the app.

As you can see, sending pictures could not be easier. Because doing this is so easy you should take pause and think about what kinds of pictures you would like to send or share. As we said in the introduction Kik Messenger allows you to send any kind of photo but this does not mean that you should send just whatever you take.

Consider that other people other that the original recipient may end up seeing your picture so never send anything you would not want other people to see. Also, for similar reasons, if one of your Kik Messenger friends sends you a photo do not save it unless you have the explicit permission from the sender to do so.

In this article we have covered all the main things involved in sending photos on the Kik Messenger app. We hope you have found our tutorial useful. If you have any comments, please consider leaving us a message in the section below.